The following is an article from today's 'The Sunday Territorian', sister paper of the Croc-tastic NT news (Croc's, nudity and ute crashes a speciality). original is here.

THE naturalist Charles Darwin observed that when confronted with a hostile and unlivable environment, organisms would mutate into strange new species never before seen on the planet. While controversial when it was first published, this theory does explain the existence of Territorians. It is fitting that the city that bears Darwin's name is also the home of a new master race that spends most of its waking hours trying to figure out how to keep beer cold.

There are many reasons why Darwinians need to get as drunk as they can as often as possible. Chief among them being the inherent torment of living in Darwin. The city lives in an endless summer and it would be difficult to tell the seasons apart were it not for the fact that in one of them it never rains and in the other it never stops raining. Either way though, it is always hot and so the city is lucky to be surrounded by beautiful beaches. Not only that, but the water is a divine shade of blue and the perfect temperature for swimming.

Indeed, the only slight drawback is that it is filled with man-eating crocodiles, deadly box jellyfish and the occasional killer shark.

Of course the Darwinians weren't the first to conceive of a place that was unbearably hot and filled with water you couldn't touch. The Ancient Greeks had a similar place - Hades.

Having said that, many Darwin residents do still go in the water during the months when there are not huge swarms of jellyfish.

At that time all you are risking is being mauled by a crocodile, which is a deeply traumatic experience but still marginally more pleasant than staying at Darwin Casino.

Indeed, the Territory is home to thousands of these leather-skinned old dinosaurs (and there also quite a few crocodiles as well). The crocodiles like to do pretty much what all the locals do, which is to say hang-out in backyard pools eating anything that's within reach.
It is perhaps for this reason that Territorians not only tolerate crocodiles but actively encourage them. For starters, there is a ban on people hunting crocodiles - a courtesy, it should be noted, that crocodiles do not extend to people.

This means that the crocs have learnt to no longer fear humans and are probably starting to wonder why they were ever afraid of us in the first place. 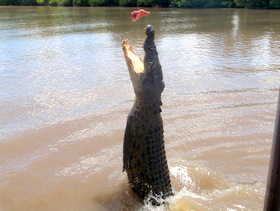 But not satisfied with one-sided existence, Territorians have now taught crocodiles to actively seek out humans as a source of regular food. Thanks to the "jumping crocs" phenomenon, these giant killing machines have been trained to think that if they are hungry they just have to listen for the sound of a small tinnie crammed with people, swim up right beside it, leap out of the water with their jaws wide open as close to the humans as possible.

What could possibly go wrong?

In many other jurisdictions, questions would be raised about the wisdom of this practice, however in the Territory it is considered not only harmless but also a viable business plan. Few other places in the world have decided that the best drawcard for tourists is to lure them to the middle of nowhere and then almost get them killed, but this is typical of the unique genius Territorians have evolved.

Not only does the strategy work, but from a Territorian's point of view it is failsafe: If the tourist survives, they get more money to buy beer, whereas if the tourist gets eaten ... Who cares? They're a tourist.

Southerners do not think in this way, which is why they are also regarded by Territorians as foreigners and thus slightly below crocodiles. Indeed, it is important to remember when visiting the Northern Territory that it is they who think you are a bit slow.

A typical example of this was one local boating enthusiast who expressed his disbelief that the authorised study of crocodiles was left to "so-called scientists" and not his moustachioed offsider, who appeared to have just drunk a bottle of Southern Comfort and was now face deep in a huge bowl of spaghetti.

Indeed, it cannot be denied that just to have survived into adulthood in the Territory is a fairly impressive feat. It is only slightly less difficult than surviving a night at the Casino (which, for example, requires guests to sign a waiver before they open the balcony door).

Indeed, I was surprised to be told that the hotel was actually rated five stars, until I found out this was out of a possible 10.

The fact of the matter is that Darwin is just too tough a place for regular humans. If the crocodiles don't destroy you then the architecture certainly will.

It's a wild nonsensical town full of mad alcoholics.

And I'm sure there are bad things about it, too.

Musings dept EU - from the far side of the world.

The Guardian had (yes I still read the guardian sometimes even over here) an article discussing the UK leaving Europe. Made me think. Now the UK would be dumb to leave. But the question that occurred to me is would they miss us(you).

I'm  thinking not, the EU has its failings not just the current troubles. One spectacular one its the amount of compromise that's required to get 27 countries to agree on anything and if you rated the counties in the EU most likey to say "NO" in big shouty caps to anything its the UK. You are the Ian Paisley of Europe.

The UK's not in the EU. If it did leave it would presumably want to be in the EEA or AEU - the smegging "common market" trade thingy structure. Which still forces the UK to pay and to obey laws. Just not change them. That would almost certainly please the Germans, and the French.