I went on to the internet and I found this:

Been helping Matt paint his boat, unsually known as the "Upside Down UFO". Not by Nokes' boat yard, no, they call it the "Purple People Eater".

That sounded familure so I googled it and I found this:

And laughed till I cried, feel guilty about painting the boat blue now.

I knew he was a worng 'un

bit of an update. 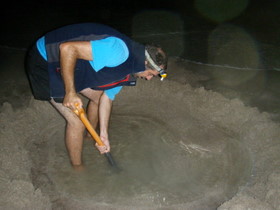 Life the universe and "immi"

I've been looking for work in Australia. Because I was told I was a lowed to. I entered Oz on what's called an ETA and electronic visa valid for 3 months, given the sail round to Darwin was nearly that I extended it to a long tourist multiple entry (I can go out and come back) visa in Cairns.

When they did that they put a rare "No Further Stay" condition on my visa - I must have looked like a wrong 'un. Explained it to me fine, if that's the way it is that's the way it is. Because of this when I got down to Sydney I went to "immi" the immigration office and spoke to them about what my options were regarding work. They looked at my passport and at their computer and said I could work if I got an employer to sponsor me.

However the guy I spoke to clearly wasn't paying attention cos that's not the case. Because of my non extensible visa, I assumed that the condition "no further stay" meant that no further tourist extension would be granted. After all I was told I could apply for sponsored work visas.

This all sort of fell apart in the last few days, when someone actually tried to sponsor me. I am moderately miffed. I've put a lot of effort into this, and have found out that if I was out of the country I'd be fine. Those of you who follow this blog will know I was in New Zealand a couple of weeks back. Obviously I'd have gone and annoyed Jake and Naz and stayed a while whilst trying to sort it out had I know. Frustrated? Hell yes.

I've appealed against this condition using the above arguments and can "expect to be rejected" within the next three weeks. 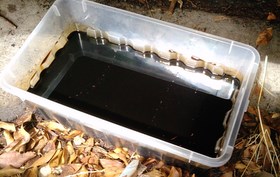 In a few weeks my vans "rego" or registration runs out. Its an NT van in need of some TLC. However up there it doesn't need to pass a test for 6 months but down here it would as it would need to be registered in New South Wales. Its tempting to head north and take it home to Darwin a short drive of a mere 4000km. Little more via Campbell in the Gold Coast and Al and Jack in port.

I'm thinking I may have some money and the opportunity to do a few weeks swan song trip up the East Coast. and even if it ends up on the credit card I'm probably going to do it. While I wait to be rejected. Dry season starts in a bit up north so its tempting. Very tempting.

Hopefully you all heard of the Tragic deaths of Phyllis and Bob who were murdered by pirates in the Indian Ocean. The situation up there has deteriorated so badly that the Blue Water Rally is stopped in Salalah (Oman I think). All but one boat is there awaiting shipment out of danger. There all due to be transported by ship to Turkey.

I have been told that the next BWR has been cancelled.

The boats that left the rally in Australia. Aqualuna, Simaderel and Peregrina were all still around till yesterday when Johnathan and Gabby from Aqualuna flew home to the UK Pete an Margie are probably bobbing around somewhere between here and Cronulla just south of Sydney delivering a Passport 40 yacht.

Due to weather they were held up, so on Tuesday they got the train down from Newcastle, Michael and Ger rushed back into town and Jonathan and Gabby  stopped by on their way to the airport. We did lunch in, arguably, Sydney's oldest pub, gave them a send of and had a toast to Bob and Phyllis's memory. Great to see them all together again. The rest of the rally are oftern on face book at the moment as they're all going nowere so hearing alot form them.

Obviously that means Pete and Margie sailed into Sydney Harbour last night, narrowly avoiding be run down by the CYC race fleet. Me Included. I also must have narrowly missed them on a road south of Auckland a few weeks back. Its a small planet. I was mooching around Simaderal's mooring lines and shore power a couple of weeks back - Matt's out board was out of petrol and we were filling it up next to their boat.

My trip to Tasmania was due to careering wildly under the Sydney harbour bridge in a squall with full sail up, disturbing Gabby and Johnathan on Aqualuna going the other way.

Its quite a small country Australia.

I've got a second degree burn on my foot, I stood in a volcano. Will try not to do it again, it hurt. Still remember the story about 6 weeks ago where we were out racing and fished someone out of the Drink? Well he's better now and won our division last night. it seems he was in a lot worse way than we though. He broke 6 ribs, then had heart failure and then renal failure and very nearly died. Looks like he's made a full recovery he was thanking us in the pub last night.

Anyway I've got to see a nurse and retrieve the battery from my van cos its flat and I need it.

It sounds like my adventure may be coming to an end, at least temporally. I am poor and probably going to have to come home. I hold all of you collectively responsible for the Tory government. If I do come home you will sell yarns for drinks. Since I've been dealing with foreign beer for so long I now go for quantity over quality. Something that may be remarkably similar to my yarns.

Driving on the Right

The Frankly awesome adventures of Evan the Canadian. - and you thought I killed and ate hitch hikers.

Fish Eye View (the orginal of this was on
Sailing Anarchy, but I can't find it to link to.

Is a term based on Freudian psychology. Similar to Porsche ownership but with out the social stigma.

Having a faster boat, which, usually, these days means a big, phallic, bow sprit. Siggy would have had something to say I’m certain.

Those of the Brighton Sailing Club persuasion will see where this is going.  My mate Matt is looking for a new boat. His current yacht is not exactly a 4KSB but he has a bad case of bowsprit envy.


Orbit (Shaw 10, shot, I think, from "Karma Police"
(Shaw 9) Hence why its not being left behind.
Rob Shaw doesn't design 4ksbs

There are many tricks to getting a boat to go, and go fast. Some are obvious, like power to weight I.E. big sails light hull. Unfortunately boats like that fall over. Dinghies get around this by leaning, or trapezing out the side. Yachts can’t really do this, it’s a matter of scale. The traditional method is to strap a lump of metal to the bottom. Odd Yachtscome along with loads of trapezes. But its really not practical.

Other methods of getting around this problem, include catamarans, width instead of keel weight, that’s why they’re fast another trick is water ballast. Fit tanks to each side of the boat fill the upwind one with water. Adding a ton of water to the side will counter a lot of wind. But your still lugging an extra ton around. And Newton’s f=ma still applies.

Simple tricks include making the keel deep, for more leverage for less weight.

All of these can bend the cardinal rule, but its still the most important factor, size. All other things being equal bigger is faster.  My mate Matt’s been looking at the other method of boat speed improvement. Canting keelers.

"never  judge a man by the size of his prod"

And we’re not taking about just a canting keel. No, one of the boats he looked at, and yes it had a very large bowsprit. Was ultra light, big mast; carbon, all carbon – no bottle screws rope lashings, no wires carbon rigging. On top of the basics of light weight and high power its got a three meter draught keel that swings sideways. Think it might be a hell of a quick boat. Its baby sister “Karma Police”, good name, owned by its designer  appears to be quite capable of holding off, and get this, not just boats far bigger than it, but appears to be able to take a 50ft canter.

OOOh look at the size of that bowsprit