You are what you eat

This book is a joke right.....? Well it made us laugh. The book cost a fortune, and has a look and feel of "spotty dog goes to the beach". Do not buy this book. Its bollocks. Oh and don't take health advice off someone as sickly looking as the bint who wrote this. Big text obviously costs more.

The back cover has a nice picture of the author. Its a nice picture because its been photo shopped. If you go back a few pages there's a sallow sunken eyed creature who looks one step from death. Too much bloody seaweed I reckon.

The 20 questions health quiz, I scored 3. I do have a fairly poor diet. Its not dread full, I have veg every day, don't eat sweets or fizzy drinks - I do eat too much Pizza. Mind you when you lose a point for for not eating seaweed every week and for drinking tap water not bottled stuff. I was bound too lose. According to this woman I'm going to be dead by the time you read this.
I have nice hard calcium rich water at home. Why should I drink worse water contaminated with chemicals that leach out of plastic bottles? Other points were dropped by not blending up raw vegetables and drinking the juice. The humble opinion of Anne the Biology Tech, which I agree with, was that this was bollocks and eating the veg was probably be better than drinking it.

There's a lot to be said for not living off junk food. But sitting down every night and imagining a bright light moving down one leg and up the other is not going to help. The only good advice in the book is that you say the silly mantras and the lightly leg thing somewhere quiet and private. You'd look a right prat doing it in public.

I'll but good money on out living this woman, despite the pizza. I'm also certain I can out run, out endure out lift and generally out fitness her too, even with a hangover. You probably do well on telly lady, but people who read books a little more sophisticated. 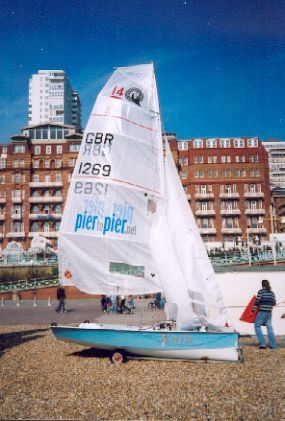 After driving the local Sign Writers Nuts, I how have a nice new Advert on my boat. The process was quite simple, though putting them on took a bit of skill. Alex from Moving Edge commented that with my sailing skills I should have stuck them on the bottom since thats the bit that's visible most of the time. Cheeky. "PierToPier.net - falls over when it comes into contact with salt water."