OK, been playing certain cards close to my chest for a while now. Been trying to get a Work Visa for Australia. After 15 years in Brighton (give or take a few trips around the world) was, well maybe not too long but enough - I can't imagine living anywhere else in the UK but I felt I was marking time.

I've spend so long in the tropics in one island or another. It seems like home now. Now as a geek my employment options were kind of limited in small paradise islands, and hell I like Australia - think the outback may actually beat the ocean, In fact I recently turned down a perfectly comfy yacht for the back of my van.

Some of your may have asked "what the £#$$&^} £#$* is Tom doing in the Philippines, or even Hong Kong. Well you would if you'd know. It turns out that for god knows how long Facebook as been posting my tweets, the main way I update it, set to me only.  I've decided to punish them by not going on it for a week at least. I was punishing it any way for being crap and annoying the absence of updates only came to light when I tried to turn them off.

A Pox on facebook and all its works. There was a day when people who were interested came here to find out what I was doing. I miss those days. I'll admit honestly my friends are much better at reading my Blog than I am of reading theirs. Sorry. Since I'm off facebook this week maybe I'll catch up.

* Includes the suburb of Hove

Anyway I digress, I'm now the proud owner of a big sticker in my passport saying "Temporary Resident", and home is where my hat is from: Darwin, the top end of the Northern Territories (whole population less than Brighton 5 times the size of the UK).

I like Darwin, compared to the other major cities of Australia its pretty small. Historically its had a rought time, in 1942 it was heavily bombed by the Japanese, who couldn't reach any of the Big southern cities.

Its also bloomin hot, the build-up is really starting and I'm not shacked up in an air conditioned palace - yet. More a 20 year old van in the back of a shed (still). But am now being paid, which is good cos my rego's due - must go and get some steering fluid leak stop from repco before they close. Need a couple of tires, sorry right sized tires - my spare is good - a different size to the rest, but good. The one I got off my boss is a third size. Damn.

What Makes a great city? Brighton's a city, though I don't really think of it as one, nor does it feel like one. Manila's a proper city, but its not great. You need several things to make a city great. To stand out from the crowd. A setting helps, I'll grant you Brighton has this, nestled between the Downs and the sea like a great amphitheatre. Manila doesn't really mange it. Melbourne is supposed to be one of the nicest places to live on the world, but not to my mind great, Adelaide is a fantastically beautiful city. The centre is ringed by lovely parks and rivers. It misses out to. Quirks are important, transport is one. London has something special. Yes other places have mas transit systems but none have the style of the tube. Many are (Hong Kong's for example) are faster, cleaner, and far more efficient but they don't have the character. Route masters and red post boxes - something that makes it stand out is required. Quirky transport helps. Manila has this the Jeepnees. Panama has it with is catholic 'n' bling converted American school buses. But misses out on the setting and another pre-requisite. Architecture - quirky but taste full helps. Beauty is in the eye of the beholder I know. But every now and again something stands out. Tower Bridge, the Opera House in Sydney, the statue of liberty, the Eiffel tower. You can throw out pretty much all the skyscrapers they're too many of them. A great city need to have all of these things. Old does help but doesn't cut it. How many times in movies has the skyline of LA been used? Eugh, looks horrible. The Hollywood sign yes, but the massive grid of horrid skyscrapers puts me right off. Looks like a badly over played game of sim city. 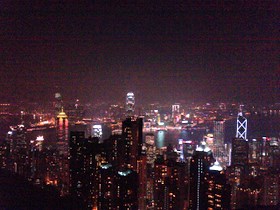 Hong Kong makes the cut. The hills on the island and behind Kowloon hem in the skyscrapers the looming bridges in the heat haze. The over size funicular railway up the peak, the star ferry and the mish mash of skyscrapers at all angles with the web of flyovers and walkways nestling under the hills. The escalator, the mid levels escalator. A crooked corridor of escalators ascending the hills crossing some streets flying over others. Only Sydney and its Harbour, bridge and opera house have made more of an impression. Few cities can you enjoy by doing nothing. The high rises of LA I was just vomiting over seem to work here. They have an organic quality rising at all angles out of the hillsides.

OK I'm at "Clark", that's Manilla's second airport. Yes Manila, its a "Ryanairport" which means its so far from Manila its takes two hours on the bus.

Public Transport in the Philippines is cheap. The price you pay for cheap is slightly unreliable. I have been told do not return to Manila the day before our flight out as frequently you may be a day late.

Why? Why Manila or why Clark? the answer to both is I am lost in Transit unwilling to go home, this may sound dreamy, its remarkably complicated. My Australian Visa is being processed, and no word yet on when or possibly even if that process with be over.  and  if  you stay more than 3 weeks in the Philippines you must extend your visa. Problem extension costs about £35 quid. Problem 2 Flight to Hong Kong * Exit Tax + bus < £35 Quid. So here's me at Clark Airport with a ticket on Tiger Airways (currently grounded by the Australian Aviation Authorities for safety concerns).

Why do I always try and Solve a problem with travel. Not sure what to do? Move on to the next place. Now the Philippines were a semi randomly chosen destination, I wasn't going to fly home to England till I hear from the Australians - too expensive. Other options included Ho Chi Min City. Formally know as Saigon, but you need a visa for that. Singapore, Malaysia and Bali. All of which I've been to before. Much as I like Malaysia - with out Mei or family as culinary guide it might end up being a disappointment after the last trip.

So Hong Kong it is, its going to me more expensive and the maths doesn't stack up in reality, but a return ticket for the price of 2 crates of XXXX Gold, return? Oh yes have further bureaucratic woes in the form of "You may not fly to the Philippines without proof of onward travel". Known better as the you must have a return ticket immigration rule. I should have thought of this before the check in desk, I've run foul of this rule before. I've waved various Grubby E-Mails at immigration officers with Yacht names on them in small island nations the world over. As  soon as you mention "Yacht" they usually give up and wave you though, unfortunately the canny buggers here have passed the responsibility to the air lines who made my buy a ticket despite me not knowing what date I was going to fly back.

So the Philippines are behind my, but I'll be coming back.  Hopefully. Tonight Hong Kong. Internet was out in Manila this morning and though a briefly saw a working wifi signal in the lobby there's none here in departures, so no way of booking accommodation in Hong Kong, seems to be there are several backpackers I Kowloon, and have train instructions. Will see how it goes. Home less in Hong Kong. No worries. I assume its wet season there too and quiet. I hope.