The Windows Progress Bar of life is slowly slicing minutes off your life:
Abort, retry, Ignore

Been looking around the Pits at Hidden Valley, for a bit this morning - mostly cos their starting the race rather early tomorrow.

Its a proper job the world solar challenge 3000km of outback to Adelaide. On the open road, a largely unfenced road with cows, roos and road trains.

Flipped by the First Road Train going the other way?

I was chatting with one of the Aussie Arrow team about what happens when a ultra light carbon fiber car with a huge flat solar panel shape reacts to the draft of a 3 trailer road train passing at a closing speed of 200kmh I figured the solars'd be flipped like a leaf in a cyclone.

Apparently however its the cars that are the issue, the road trains slow down. When you've 18 gears and no syncromesh that's very generous.

He did admit that they have stability issues at speed. They're car does kind of look like a wing. Must generate a fair bit of lift. Given like most competitors its build out of carbon covered nomex, held together with gaffer tape, and where necessary straps and string, its kind of scary.

It does appear to be a young person's game the vast majority appear to be universities. A very small number of local (judging by the beards) and me where the oldest people there, and there were precious few of us looking around. This is Darwin, they'll be fishing or in the pubs. 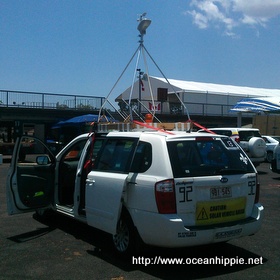 The place was a hive of activity, people with multi meters, people misting (I'm informed by 2 years backs coverage by the register that keeping the panels clean is vital).

On thing I noticed was an absence of big corporate, well anything,some sponsors but no little sign of big money. But no big names were obvious - universities from all over the world.

What raised my attention was 2 years ago, swimming in Berry Springs, I ran into some guy's invovled with the last race. Their hire car was modified, more "geek my ride" than "pinp my ride." Wood cables, guy ropes screens and a weather station strapped to the roof with ratchet straps through the doors.

On of the things you notice when you leave is the shear bloody minded incompetence of the UK, specifically the bits where you need to get something done by someone on you behalf, online banking, getting an address changed on something of that nature. During the 3 years I've been in Oz my bank has totally failed to Fuck Up, not only is that un-fucking-believable by UK standards but it has a fantastic website with simple interface which can do a whole bunch of stuff pops up Useful information etc etc.

Compare that to the UK bank as I have just done and ... Damn.... Its bloody useless. What's more in the UK I'm with the Coop who I thought were the bloody best bank! Believe me I remember Barclays.

How can it be possible to be so Fucking useless? Seriously? Britain is a fantastic country you just need to shoot your entire services industry. Ahhhhh unfortunately that's the only industry left in the UK. How is it so successful I do not know, they're so bad at it, its easier to build a brick wall from scratch, including digging the clay and firing them yourself and bang your head against than get a perfectly simple thing done.

Whist waiting in the 3rd browser for a crappy UK website to load so I could log in I read the awards its apparently got. Awards! For what? Crashing out with a 403 forbidden, not loading and then taking in excess of seven minutes to load. Then I remembered - its England......

Whilst waiting to change my address (I failed and gave up) I wrote them this:

Not only does it fail to function in a variety of modern browsers – I got in eventually on the 3rd attempt, Its sloooooowwwwwwer than a Pulse Dial modem in the Galapagos in the 90s*.

Seriously I’ve browsed around found this email address, written all this AND THE LOGIN BOX HAS STILL NOT APPEARED.

I’m in Australia – I could get better  performance out of a Carrier Pigeon to Lancing. Even If had to raise the Pigeon’s from chicks it would be an improvement.

I know you are in the arse end of the universe in Lancing, hell I refuse to go back to Brighton let alone Lancing but surely you can find someone who can fix it? Hell I know a couple of likely lads from Lancing who run a couple of Universities sytems. I can put you in touch if you like.

Please FIRE you web team – I can run a better service than this by randomly strapping usb sticks to migrating water fowl – some packets might actually get through.

Your crap website has timed out. I notice that you were blaging about how good you are on it before it died completely – presumably that’s by British standards which are so low as to be only spotted by ants when the trip over them.

Have a really miserable day.

Oh your in lancing, well, I’m pretty sure you’ll have a miserable day anyway, thanks for spreading it. Lancing’s pretty close to sea level, so maybe global warming will eventually put you out of my misery.

* I tried this its was bloody awful