Scene One an air conditioned bunker in Mumbai, rows of desks, like the banks or oars on a trireme line the floor. Suited figures behind mirrored glass watch over them and the large wall mounted displays.

Half way along row 47b a small light winks from green to amber. The operator fingers his hard won PHD and looks nervous. At the end of the row, a yellow beacon starts to rotate. In the gallery on the floor above, a nervous suit starts ushering out those with visitors passes around their neck.

In a bank in suburb that Tom would normally not been seen dead in the fan in the redundant power supply in a cisco router clicks slowly to a halt, there is total silence. Except for the floor polisher.

Scene two an IT Company in Sydney.

A phone rings, an extremely well qualified but heavily accented voice tries to explain that there's a problem in Nakara! The man from Sydney call HQ in Melbourne, who calls Brisbane to see if there's a spare PSU in the NT. Who wakes my collogue up. God knows what he was doing in bed at 9PM on a Saturday night, bit that his problem.

Oh God Brisbane realises there's only one PSU in all of the NT. he drags out the dispatcher get a PSU on a plane now.

Deep in a shed in Darwin Tom cracks another cold one and tries not to get dragged into the French backpackers drinking games. He sleeps the sleep of the Dead. Only being awakened on Sunday morning by the missed call he slept though. He calls back, "yes that's the address, same address you always post to", "Oh good my colleague and my boss said the same thing when you spoke to them well done!"

By now I am wide awake, emails are notificationing me, the Nimitz class Carrier "George Bush" that was innocently handing out gold plated colt .45s and medals to the Dictator of the small but oil rich republic of Bongo Bongo land is already 500nm offshore, her non nuclear escorts trailing in her wake.

Putin is looking at grainy thermal satellite images of the Pacific, fingers jab through the cigarette smoke at the angry heat blobs of an American carrier group at flank speed. The Doomsday clock is moved another minute to midnight.

Meanwhile back in Darwin a closed bank (is F*&king Sunday - try getting hold of your bank on Sunday, all the kings horses and all the kings men couldn't do it!). Totally oblivious. Not to mention un-effected.

Scene Three Darwin in the Build up.

Monday Dawns, no banks routers are effected, outrages are agreed from India to Brisbane, all leave is cancelled Vera Lyn is disinterred re-animated using voodoo and forced to sing Bluebirds over the white cliffs of Dover, the USS battleship Missouri is re-commissioned* for the third time and puts to sea.

The Power Supply is not here yet, hey its Darwin, the bank is STILL oblivious. Changing the Power supply requires an outage. So 5pm job is scheduled. Munckin here rocks up and nobody expects him. No one told the bank.

They didn't understand a word I said, but I had fun filling out the health and saftey forms and playing with the pencils on the bench there.

Tom Sounding unceasingly like Major Bloodnok from the the Goons hears the story of the floor polisher tripping the power, and exits stage right to the Pub.

In the bunker in Mumbai in row 47b a man is stripped of his PHD and marched out and crucified, Life of Brian style. Another SLA is voloated by an uncaring customer who has the audacity not to work weekends. Chorus of Bank Mangers, IT Techs Dispatchers, call centre slaves, Territorians, New South Welshmen and all sing "all ways look on the bright side of life".

* The other 2 being "The Seige" with Steven Segal, and "Battleship 2012" with a slightly ashamed Liam Neeson combined them you get a one star movie! 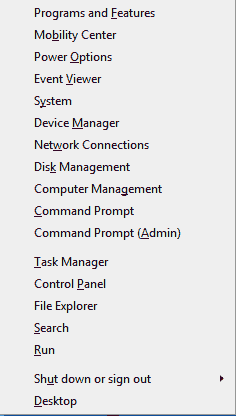 I like everyone with the power of choise, am still on windows 7. This is because I hate windows 8, and before anyone asks its not just stick in the mud sulking. I've seen enough of it at work, I've compeletely built an old laptop, this one actually to run it, and then to run 8.1 and tried to live with it for a week. I know how to use win 8 I just don't like it. Who would. the start screen sucks its impossible to operate at all in remote desktop - which as support I frequently do (server2012). Its just bloody awful. The proof of the suckyness of windows 8 can be ilustrated by pressing Start+X on your keyobard.

Now early on In win 7 I was quite critical, it crashed a lot and I couldn't get drivers for it, see this and this post, now I just crashed win 10 - trying to save a file to a stub network via hidded c$ share from Jasc, (remember them) Paint Shop Pro 9. Yes a program that will not even run on Areo. So I don't think I can critisise it there.

TRIVIA: Why Ten? Rumor has it that there are lots of programs out there that begin with code that looks at the beginning of the windows version to see if its "Windows" I.E. Win95 or 98, or "Windows NT", code like if(versionBegins=Windows9) then { the result is windows 9 would be mistakenly idenetifed as windows 95/8. So they skipped to 10.

Bloody hell its fast. This laptop is a mid 2011 ish, first gen i5 with a Sata II SSD in it, yeah nice but hardly cutting edge. It had one careful owner and one un-carefull owner, me. Its been coffee'd turned into a hackintosh, had bits of its hardware swapped, its 3g card is in a jar on my desk. The left mouse button is decidedly soggy with use, the track point is bald. However its flying along under windows 10, it may be part window animation speed, but everything is near instant.

Windows 8 may have been fast as well, I've never been able to tell, the GUI is so goad awful you never get to do anything in a hurry. Windows 10 brings back the start menu, which means you can hammer the start menu button in the time honored way and fir up programs quickly then Alt tab between them. Even the fucking useless windows store apps run in windows, so when you accidentally (nobody would do it on purpose) launch one of these you can [X] out of it and alt tab still works.

the M$ feedback nagger cuts in at this point and asks "how easy was it to Alt Tab" I answered Fuckin Easy, in the how of encouraging them.*

Well, its not windows 8? Ok seriously Multiple desktops, workplaces if your used to Linux, now when I used linux more, I loved multi desktops. Back then it was because it was worth re-arranging you windows so you had workspaces.

Microsoft windows apps usually end up as full screen until win 7 the window manager was pretty ropey for small windows. But sometimes I end up like my linux days with a whole bunch of tail windows and scripts running at the same time then arranging them in a desktop  and the workspaces and the snap windows to corners thing is going to work for me in the same way the killer feature or Win 7 is that half screen windows snapping. In win 10 its been tweaked - if you snap a window to half screen then it officers you a list of windows to snap to the other half. neat. Hope this works on multi monitors. 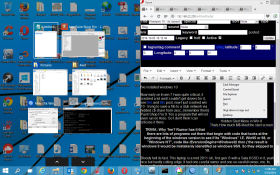 Snap to half + picker

Well how do you exit out of a shell script or program? CTRL + C I wonder if that still works? Why do I ask, because if you drag a box with the mouse over the command prompt it draws an normal selection and Cut/paste works. Nice. and 20 years overdue.

So were at 2 features I might actually like, that's a lot for a new version of windows.

Couple of things, its garish and soulless at the same time, the windows have a huge, well its more of a blur than a drop shadow, around them, to try and give depth, doesn't really work. The start menu is shockingly garish everything else is understated. Scrollbars are so stylised and minimalist grey its hard see where on the page you are. You long for 3d styled anything. Right up till you hit start and search where unreadable cyan text on light blue with garish icons , icons selected for misplaced minimalism rather than practical identification hurt your eyes.