When is murder justified?

As resident geek, I've now been shown a couple of "new" PC's both massivley out spec at least most of my PC's. The trouble is they're running windows vista. They've only a gig of ram. This is theft, extortion, it really is. I'm sitting here, i've cleaned it up nothing's running in the background that isn't essencial. The hard disk's nailed to the roof just swaping windows's own programs in and out of swapfile.

Some dumb mark paid for this machine, effectivly its a paperweight. A single monkey with a typewriter is more likley to come up with a new version of Hamlet than this PC do anyhting worh while.

It makes me particualty angry. I know what I'm doing, the poor lady who bought this has been right royally done. Its like selling a car with an engine, but no fuel tank. I've been watchig it trying every trick I know to squeze juice out of it, the CPU throttle never goes above 50%, let allone the usage? How could it the disk is so buisy prentending to be memory that it could never supply the CPU with sufficient data to actually work.

Now this one was bought from ALDI, which says it all, windows vista home no downgrade to XP. Now punching the aldi chceckout girl in the face is not justifeid. Punching the face of anyone from Medion I suspect is completly justified. This PC didn't work when it left the factory.

The other PC I saw like this was sold by an employee of a computer shop. He (I'm assuming it was a he) is another matter entirely. I think murder may in his case be justified. He looked the potential owner in the eye and took her money, despite knowing full well she was throwing it away.

This makes me really angry, nothing will ever be done about it, Microsoft lied about "Vista Capable" but the lawsuit in the us had to be dropped. Becasuse it does actually function with vista on it. Just at the same speed as browsing the internet via carrier pigeon whilst swimming in syrup. So next time you see a shop with a vista pc and 1 gig of ram for sale break its windows and point them at my blog.

Foot note, and yes they both had vista home so no prospect of a windows 7 upgrade, that would probalby run fine. 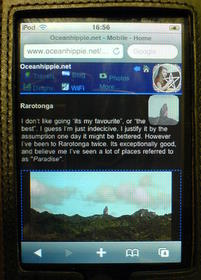 Woot, got a new iPod Touch, decided to see how tricky it was to "Mobile Friendly" this site.

Thanks to someone else's browser ID lib, some nice guy's image resizing scripts It all works quite nicely. Ben and Dave have tried it on their blackberries.

Its based slightly on the BBC's front page. Thanks aunty. It turned out to be reall simple. Got a few isues with too long menu items and fixed height css boxes. But all in all I'm pleased

see here for how to do it and here to see what the page right normally looks like.

If your on a mobile gadget you should be reading this in its mobile form. If not then you can see the finished result at /mobile/

RSS users need to go to my blog to see the video http:// www.oceanhippie.net/blog.php?mo=6&ye=2009

Telephonica blue find a rock big time. Woah. Typical Ian Walker, "this whole counties rock". Ken Read on Puma looked extreemly streesed. Can't say I blame him watching someone go from 15kn to dead stoped right in front of you is scarry. I've tried this at less than half speed. Matt ended up in hospital, the boat in 6months of reapir.

This is not a rant.

No really it isn't. I as those of you who have read "it works (just)" description of a yachites idea of how to deal with an ipod. I have to say I LOOOOOOVE my new ipod touch, yeah its youg to be seriously compromised when I gad about on the briney again. But, I have to say "Well done, its bloodly exelent".

Now I'm not paying for an iPhone, infact I've speant about £20 of pay as you go credit in 5 months. Don't want a phone.I've wifi all over and live in Brighton. So who wants a phone?

The ipod touch as so far failed to crash once. Roams wirelessly, is suprisingly practial to use. In all I love it. It twitters, its now a remote touchpad for my media centre telly, twitters, farcebonks reads my email (though I admit  it didn't like my mail server, but really i can't blame it, the SSL cert on the server expired in the stone age). One new ssl cert and I'm cooking on Gas.

I particularly like the fact that I've read NO instuctions, needed no help and speant no money on apps. OK lie I'm a geek I speant 59p on an ssh client. Its really simple powerfull and great. Love it.

PS NEVER buy anything made by HP. God I'm begining to hate that company. Their printers don't work, 1 in three servers don't work on delvery. And with the possible exception of stuff from PC world their laptops are the worst I have ever seen. God their laptops got better when they bought compaq god....

Windows 7 in all its FAIL glory 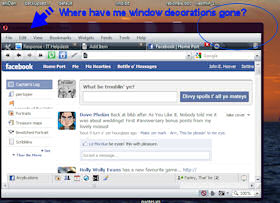 Where have my decorations gone?

Ok we all know vista is a steaming pile of shite. But lets go back a while and see why you souln't get exited about windows 7.

Windows XP is, to all intencive purpouses, Windows 2000 (Technically NT 5, XP being NT 5.1). Windows 2000 is by far and away the best, most stable OS microsoft have ever released. Windows XP is windows 2000 with the teletubibes hired to redesign the look of it.

Windows 2000 when it came out would run and run and run without crashing, if something (sigh explorer) got killed you could un-kill it, where as in previous version you had to reboot. If it had a problem it was that it was for the time, increadibly resource hungry. You had to buy a new PC to run it. It was worth it mind. it was good. Still know people who use it today. Because of its massive hardware requirments Microsoft rushed out "Windows ME" or Mirgaine Edition ok Millenium Edition. I've seen virus's that are less trouble than this. A worse OS microsoft has never produced. With the possible exeption of Windows Vista.

XP really isn't like 2000 any more. Windows XP Service Pack 2 is more differnet to XP than Windows 2000 is. SP 2 is actually quite a differnet beast. Some programs will only run on SP2 or later.

What this tells is Win XP is really a tweek not a full OS, fortunalty built on a good base. Win XP is only a year so after 2000. it is an "improvemnt" (depends on your definition) of a good OS.

Windows 7 is coming along shortly after windows vista. However the similarities end there. Yes its better than Vista. But its a long way to go to compete with XP in terms of stability. Lets face it it was worth buying a new PC with windows 2000 - it wouldn't run other wise, but when it did it was good. With vista it wont run on old hardware, but its still not worth buying new PC to run it on. Infact serveral PC's sold with it weren't really up to running it, one poor sod I met I left a message for the sales man. "how can you sleep at night selling a PC with a puny CPU and only a gig of ram with vista on it". Many, Many people downgraded their new PC's to XP. Many more wished they could.

Windows 7 is a Fix for vista, its what vista should have been. Insead of improving a good desing they've had to fix a bad one. This is not a sound principal to be starting from.

The good news is you don't need as good a PC to run 7 as vista. But for gods sake dream that it is the second comming of windows, its not. Its faster, more stable and easier to live with than vista. Lets face it that's not hard. Phew. It still crashes a lot. They tend to be mnor crashes, restarting explorer will oftern fix them but annoying stuff that wouldn't hppen to XP. 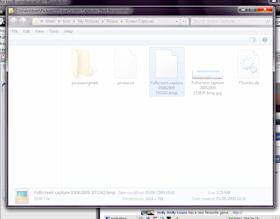 Most of these are water off a ducks back, but explorer's cosntant crashing is starting to get on my nerves. If your not a sad geek like me who likes the nobby desktop effects, and jsut wants a computer that works, don't get exited about 7 stick with XP. I've jsut rolled vista back to XP on my mates new PC - he runs his whole buisness from it, I won't be putting windows 7 on his PC for a long time yet. Upgrading your os? Gotta a PC or network with XP on it? Leave it there, in a year or 2 windows 7 may have become woth it, but were in a credit crunch, don't buy a PC till you have too. Now is not the time, 7 will be out in the autumn. If you want a netbook buy 'em now while xp's still on them. Other wise do an os re-istall, buy a ram upgrade this will make your machine feel ike new. And keep you old machine for a few years. Then when 7's a couple of SP's old get a new PC then.